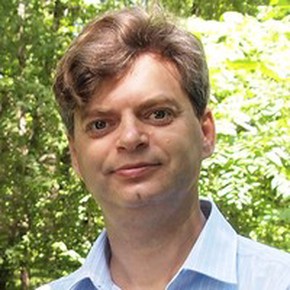 Valeriy Kriger was born and raised in a non-religious family in the Jewish Autonomous Region. In his childhood Valeriy attended a sports school; he became a master in acrobatic gymnastics and participated in competitions and performances in partner and group acrobatics. After school he was accepted by the Faculty of Physical Education and Sports of Khabarovsk Pedagogical Institute. At the senior level he was interested in fitness activities; he finished a course in massage therapy at the Department of the Institute of Physical Education in Khabarovsk. After his studies Valeriy worked as a massage therapist in a clinic; since 2000 he has had his own office.

Although Valeriy’s parents do not fully share their son’s religious views, they respect them.

In 2017 Valeriy married his soulmate Natalya. When she was still a child Natalya was left in an orphanage after her mother’s death. Her grandmother took her from the orphanage and raised her, giving her all the warmth and love in her heart. She helped Natalya to see the value of the Bible’s counsel and principles. Since 2014 the grandmother, now 92, has been bedridden, so Natalya and Valeriy have been taking care of her. They love their friends, play volleyball and are fond of rafting on the river, which gives them the opportunity to admire nature and meditate on the Creator.

On 29 June 2018 Valeriy Kriger was made to sign a recognisance agreement because of his religion. His wife, his parents, his 18-year-old daughter from his first marriage, his relatives in Russia and abroad, as well as his colleagues and patients are completely bewildered by the situation. They openly express their concern and hope that this criminal prosecution is just a terrible mistake.

Zagulin Dmitriy
Загулин Дмитрий
Номер уголовного дела:
11807990001000008
В чем подозревается:
according to the investigation he together with others conducted religious services, which is interpreted as “organising the activity of an extremist organisation” (with reference to the decision of the Russian Supreme Court on the liquidation of all 396 registered organisations of Jehovah’s Witnesses)
Регион:
Jewish Autonomous Area
Номер дела в суде:
1-65/2021 (1-609/2020)
Расследует:
Investigative Department of the Directorate of the FSB of Russia for the Jewish Autonomous Region
Населенный пункт:
Birobidzhan
Текущая стадия дела:
разбирательство в суде первой инстанции
Возбуждено:
14 May 2018