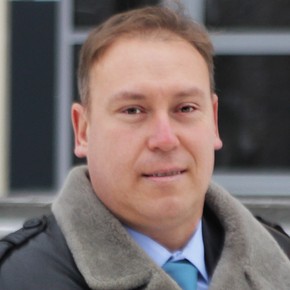 Ilkham Karimov was born in 1981 in the city of Dzhambay (Uzbekistan). Since childhood he has been interested in radio technology and was involved in sports. In order to assist his family he bred rabbits. Ilkham’s father was a teacher, his mother is a seamstress.

Ilkham received his secondary special education and worked as a glass-blower. In 2000 he moved to Russia, to the city of Belebey (Bashkortostan). Ilkham worked three jobs, as carpenter, installer, electrician and odd-jobs-man, in support of his family: his mother, two sisters and a brother, who remained in Uzbekistan. Later Ilkham’s entire family joined him in Russia.

In 2001, when Ilkham faced an injustice, he prayed to God for help and the very next day he met Jehovah’s Witnesses. Eventually his mother, sisters and brother joined him in studying the Bible.

After moving to the city of Naberezhnyye Chelny Ilkham met Yuliya. They married in 2012. Before Ilkham’s sudden arrest he helped Yuliya to bring up their son, to support him in his studies and his cycling; the whole family enjoys working in their garden plot, spending time with friends and in nature.

Ilkham’s criminal case and arrest shocked his relatives and friends, because Ilkham is well known as a moral and law-abiding man who has nothing to do with extremism. They are convinced that the Russian Constitution must guarantee freedom of religion for everyone.

Myakushin Vladimir
Мякушин Владимир
Номер уголовного дела:
11802920009000256
В чем подозревается:
according to the investigation he participated in religious services, which is interpreted as organising, participating in and recruiting others into the activity of an “extremist organisation” (with reference to the decision of the Russian Supreme Court on the liquidation of all 396 registered organisations of Jehovah’s Witnesses)
Регион:
Tatarstan
Номер дела в суде:
1-184/2021 (1-1963/2020)
Расследует:
Investigative Directorate of the Investigative Committee for the Republic of Tatarstan
Населенный пункт:
Naberezhnyye Chelny
Текущая стадия дела:
апелляция
Возбуждено:
25 May 2018